Custom Socks Ink specializes in custom made socks from the highest quality, moisture-wicking yarns that will keep your feet dry and comfortable.
All of our socks have reinforced heel and toe for durability and a specialized flat toe seam to allow for better fit. Our products are American Made at our facility in Newton, NC. 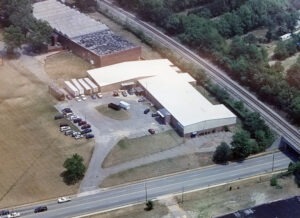 One day management sent out the word that the whole place was going to shut down in two weeks and AC didn’t like that idea.  He went to the owners and offered, if they would finance his plan, to buy the whole place himself.

They said okay, and within six months Mr. Woody had mortgaged everything he owned to buy the company.

Ol’ AC ran the place for nearly sixty years until he died in 2005, and then his daughter, Ranae picked it up and ran the company, successfully making socks until the 100-Year Flood of 2013 and the Chinese wiped her clean out of energy.  With more and more American sock factories heading overseas, eight and a half feet of water in the factory with no insurance drowned, not only all of the sewing machines, but Ranae’s single-minded determination to compete any more against cheap, foreign labor.

So, her son Alton took it over.  He’d worked for his mom for the last seven years, he knew what to do. This was the family business, the one he had grown up in, and Alton was ready to make it work.  He was young and energetic.  He was the kind of guy who knew how to build and fix anything that needed it, and his family’s business was a home-grown challenge rising in his blood. So like his mom and grandpa before him, he took the place on.  And he bought insurance.

Like ol AC, Alton threw everything he had into rebuilding and it took him three years to get the factory repaired and re-opened.  He’d watched the bulk-manufacturing part of the business die as he was rebuilding, so he sold off one building of the plant and re-opened as Custom Socks, Ink, focusing on American-made custom socks, made right, made to last, made for the people who knew what they wanted.